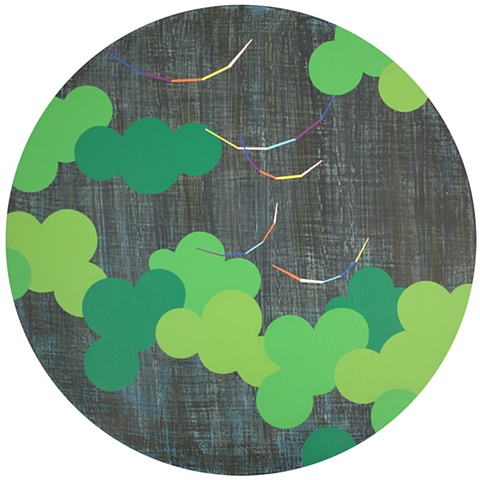 Gav, Musician
Egg Tempera, Acrylic, Gesso on Board
600mm round
< previous next >

Gav considers himself to have a very good imagination – especially when it comes to music. This is clear to me when I ask him if he daydreams. He explains to me, after reading a book, he puts it down and closes his eyes, sometimes he feels like he is still reading it, carrying on the story. The book inspires him to make his own story. Daydreaming is a necessary part of his life and he often wonders how things would be like for him if he had taken a different course in life.

Gav was brought up by alcoholic parents – they weren’t down and out alcoholics, but he would come home from school and his mother was often drunk. He felt like he couldn’t get any help from them as a kid. When Gav started playing music he thought it was something that everyone could do, but he soon learnt that he had a gift that not everyone else had. He was playing gigs at the age of 12 years old, and soon started earning more money than his accountant father.  In his 20’s he decided to focus on his music and learn how to play properly. It was easy for him to get work, he has worked with Billy TK and The Human Instinct. Today he likes busking, “it suits my life best right now”.

Gav has been a drug addict, “most of my life”, he says. I ask him about this and how it affects him and the people around him. “The fact that I don’t have a lot of money has kept me alive, so I can’t do harm to myself with the drugs. I think if I had money I would spend it on drugs and I wouldn’t be where I am today. I am not a follower of God, but I believe we all have a path to follow, and I believe this is the right life for me right now. Once you start you can’t stop. You can never get enough, yet in reality you’ve already had too much”, says Gav. Gav looks like an old rocker, passionate about music, but someone who doesn’t necessarily need luxuries in his life to be happy. And Gav is happy, “I can’t be any happier, physically, at the moment. And if I’m not, it’s always my own making”.

In times of stress and hardship, Gav imagines himself to be in a safe place emotionally. He can take care of the physical side of himself, but the emotional side is a lot harder when he doesn’t like himself. He has a place that he often visits when he needs to escape. It’s in the Domain, in a secret spot that no one else visits. He can sit there with a book and lie in the sun and not see anyone all day. He describes it as quiet and calming.

When I ask him what his ultimate holiday destination would be, his answer is Outer space. When I ask people this question, most people day something like a tropical island, Gav’s imagination is something else. “It would be amazing to see the world from outer space; there are not many people who could say they have done that”. Gav describes himself as cautious, careful, weary and a worrier. He was going to say he is shy, but thinks that is an excuse for not being bothered.