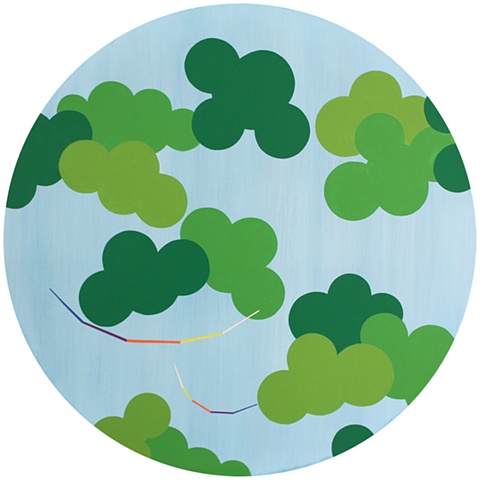 Angus, Maxillofacial and Oral Surgeon
Egg Tempera, Acrylic, Gesso on Board
600mm round
< previous next >

Angus is originally from Glasgow, Scotland, but has been in NZ since 1994. He gives me a great first impression and seems like a really happy, funny character. He obviously loves his job and has been practicing since 2002...he spent 10 years as a full-time student, something he comments could be a form of escapism for some people. He thinks back and ponders if it was for him. Maybe for a little while, until he became sure of what he was trying to achieve.

Escapism to Angus means being able to switch off from work and not be contactable. In his job he get patients calling him at all hours of the day and night, and it is hard for him to sometimes get a rest from it. When I asked him what form of escapism has he indulged in lately, he answers “I bought a Porsche for fun.” He is really in to his cars and now wants to learn to ride a motorbike.

We get in to a conversation about his work. He essentially has 2 jobs. His bread and butter work is the dentistry. The other is the maxillofacial surgery – he basically fixes broken faces. He fixes about 400 to 500 a year. This includes anything from car-crash victims, interpersonal violence, broken jaws and oral cancer patients.

I ask him what are some or one of the most horrific things he has seen in his time of being a surgeon. He tells me of a story of a 15-year-old boy whose father has a gang background. The boy and a mate were playing around with his fathers sawed off shot-gun. Not realising the gun was loaded, it went off while the barrel was pointing at the boys face (from his nose upwards). He shot off the top part of his face and survived. You can just imagine what state of mind someone like Angus needs to put themself in during situations like this, find a calm place within themselves I would guess.

On his off time Angus likes to escape in to a book, “it’s the easiest thing to do without physically having to go somewhere, ” he says. However, if he was to go somewhere, his ultimate holiday destination would be a Greek Island, not too hot, quiet and the most important thing to do all day would be to eat lunch.

My impression of Angus is that he is pleasant, mellow, easy-going and funny. He describes himself as often loud and cheerful.