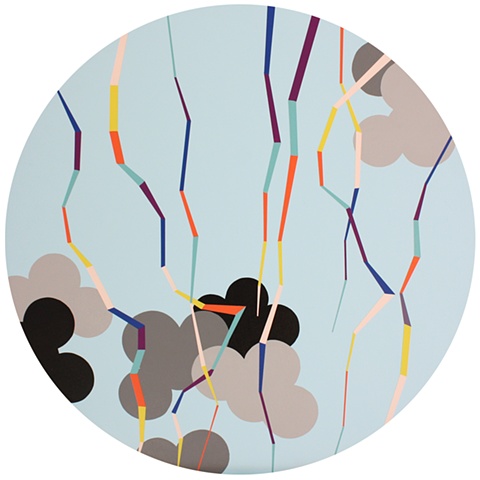 Nicola, Waitress
Acrylic on board
600mm round
< previous next >

Nicola is quite pretty, really skinny and openly admits she has OCD. I ask her what her ticks are and she shows them to me which makes me more aware of them during our conversation. She is a day-dreamer, day-dreaming about how life could be, and a people pleaser, which she says is a weakness of hers. Lately she has been indulging in watching TV as her form of escapism, she says is a distraction from not doing what she should be doing. Nicola describes herself as impulsive and straight forward, something that shows with our conversation.

Nicola is a recovering addict. She has lived 1000 lives in her short 27 lived so far. Starting to indulge in drugs when she was 15 years old, her using became more progressive over the years and then she became pregnant at 18 years old. When her daughter was 3 months old Nicola tried P for the first time. She describes the progress of using every second weekend at first, then 3 days a week, then to 4 or 5 days a week. She became involved with dealers, cooks and gangs. Put herself in situations that risked her life, but because she was high she didn’t seem to care. I asked her if there was a reason why she started using and was she using as an escape mechanism. She said that she sometimes took drugs to help her psychologically deal with being a young mother. This was her way of escaping from her parental responsibilities.

It was when she was arrested for conspiracy to supply that her life took a turn. She spent a day in the cells and was released on bail, she never went to prison because her boyfriend at the time (who the cops were actually after) took the rap for all charges. Nicola then went to rehab to clean up her life because she wanted to not only help herself, she knew she had to do it for her daughter.

Nicola is still sober but has fantasies about going back to that life again and using again. “I don’t though because of my daughter, and I have too much to lose. However, I am an addict and always will be.”

I went to this interview knowing that Nicola had been to rehab, but I had no idea of the life she had lived. She told me her mother is an alcoholic and thinks her addictive qualities are hereditary. With addicts like Nicola, it’s not only about the escapism, it’s about the need and want to reward themselves to make themselves feel happier. However, I guess you could say that drug abuse is a short cut to false happiness.