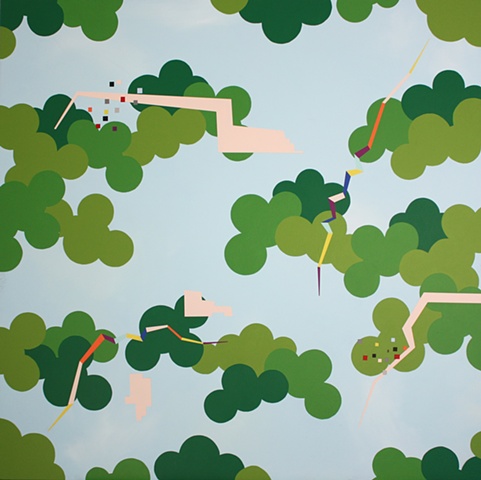 This piece is currently on loan and on display at the American Ambassador's residence in Wellington, New Zealand

Sophia is a successful business woman and also an artist. She is a 3rd generation vegetarian and was raised in an alternative family home. Her father was a Naturopath and her mother was in to Palmistry and Astrology. Oh, and she had an aunt who was a nudist. Her parents split up when she was 3 years old, although she and her sister still saw their father – until he disowned them when they were teenagers. This was a difficult time for Sophia, she went through a period of depression and adopted eating disorders to cope. Sophia had difficulties with her step father growing up as well, so she didn’t really have a role model father figure in her life to turn to.

Getting married at 20 years old was an opportunity for Sophia to escape her home life and childhood. She thought this was the answer to her happiness. It was only after she divorced her husband that she realised how controlling her husband was. He had an affair with a woman and left Sophia for her. Months went by and she gave him a second chance. They had another child together. Sophia suffered from post natal depression after both of her pregnancies. For any mother raising a child whilst going through depression is a hard thing to do. The marriage was broken off after a light bulb moment when he said to her “I knew if I kept you depressed you would stay with me”. She never looked back after that moment and moved on with her life. “It’s a levelling experience going through a separation,” said Sophia.

Sophia has endured many traumatic things during her life so far.  She has also suffered physical abuse from her ex husband and sexual abuse from a partner after that. Sophia dealt with everything by throwing herself in to work more “this was a way to occupy my mind so there was no opportunity for thoughts to creep in.” Blocking is another form of escapism for Sophia, she doesn’t allow herself to think or dwell on situations, so throwing herself in to work is the perfect distraction. Although some may question if dealing with the issues this way is healthy, Sophia doesn’t believe there is anything unhealthy with it. She is a self-confessed workaholic.

Sophia describes herself as passionate. I think she is an incredibly strong and positive person. She is grateful for what she has in life and likes to think about the positive side of things rather than focusing on the negative. She has no regrets and is happier today than she has ever been in her life. “Everything happens for a reason, people have life lessons to learn.”